Get fresh music recommendations delivered to your inbox every Friday.
We've updated our Terms of Use. You can review the changes here.

If We're Going To Have Hope, We'd Better Place It In The Right Place

by bravery in battle 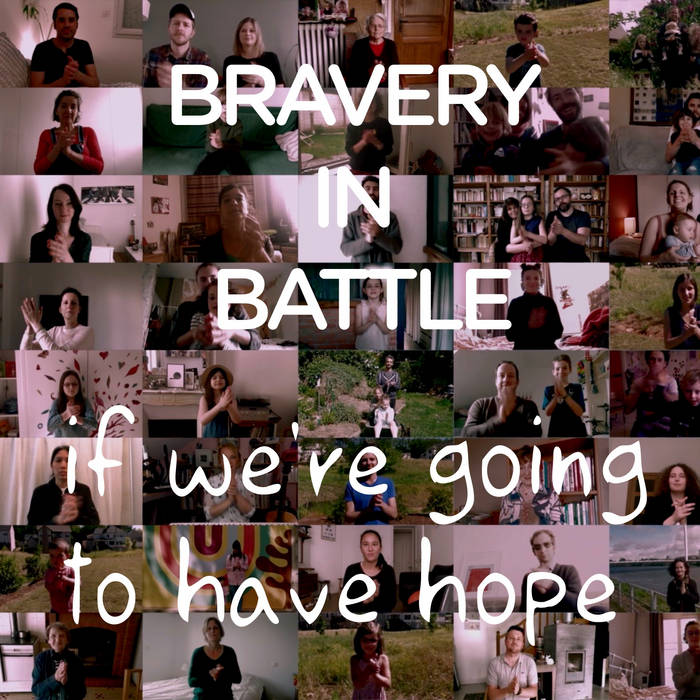 May, 2020 : what kind of society do we want to live in? Which values to guide us? In this new powerful post-rock track Bravery in Battle illustrates the urgency of placing the human being back at the centre of our societies, musicians recording separately, with the help of more than a hundred participants, all in quarantine at home.

Based on interviews taken from the Music & Video project "THE HOUSE WE LIVE IN".
Thanks to the words & pictures of Dr Vandana Shiva, Bill McKibben, John Francis, Paul Hawken, Clive Hamilton & Hubert Reeves.

Clive Hamilton
Over the last 20 or 30 years, the values of the market have colonized so many aspects of social life where they simply don't belong.

Vandana Shiva
We see it on all our countries, the influence of big money on decisions that affect the lives of ordinary citizens.

Bill McKibben
Companies have far, far too much power.

Clive Hamilton
Increasingly, corporations have come to believe that, in order to pursue their financial interests, they must control, influence, the decision-making of the state.

Bill McKibben
At the moment, our political systems are dominated by wealth.

Clive Hamilton
We see now economists bring their values and their ideas into education, into welfare services.

Vandana Shiva
And the corporate state has only one function : how to enclose the Commons and privatize the common good and exclude large numbers of people.

Clive Hamilton
The power of money has become so corrupting that the voice of the people has increasingly been stripped out and destroyed.

Paul Hawken
and that is destroying democracy and the cost is the environment, people, and the future.

Bill McKibben
We’re big now. Our species now determines what happens on the face of the planet.

Clive Hamilton
Then the economy insinuate itself into our own minds.

Bill McKibben
We've been taught to think of ourselves firts and foremost as consumers.

Clive Hamilton
We adjust our thinking, our understanding to suit the needs of the market

Paul Hawken
We look at the headlines or watch on TV: we often see the venality of humanity, we see the corruption.

Paul Hawken
It makes a very strong imprint as to who we are as people. And you emphasize the idea that, if you're going to survive, the you have to place yourself above and beyond others

Vandana Shiva
And this essentializing is then leading to all the hatred that we see around us.

Paul Hawken
But actually, it is just not true. It's propaganda and ideology.

Bill McKibben
In fact, we were built for connection.

Bill McKibben
That's what we were built for

Paul Hawken
They're to be seen in every country, every province, every tribe,

John Francis
We can rediscover our connection with each other

Vandana Shiva
All societies which have thought of human welfare have always
protected, renewed the Commons.

John Francis
So what is it that we can do ?

Paul Hawken
If we’re going to have hope, we’d be better place it in the right place : a world that is signified by justice and by honor and by integrity, not by narcissism and sociopathic accumulation of goods and money.

Bravery in Battle (Paris) produces a music blending spoken voice (as the source of melody), video, science, philosophy, electric and acoustic instruments, (strings, brass, bells) and seeks to offer global works questionning, with music, our relationship to the world.
Founded by Paul Malinowski, in 2010, they have created a wide and unique sound, powerful and full of melancholy at the same time. ... more

Bandcamp Daily  your guide to the world of Bandcamp

Quelle Chris joins the show to discuss his most recent release, "DEATHFAME"